It took a village of kind-hearted people to save this one small soul but has opened doors of opportunity to save others.
​A special thank you to all those involved with Noah's recovery.

On the 29th of September, a green sea turtle with Fibropapilloma (FP), a Chelonid Fibropapilloma-associated Herpesvirus, was captured for tag and release off Peter Island, BVI by the Association of Reef Keepers (ARK) as part of the 3-year UK-funded Darwin Plus STEEL Project (Sustaining Turtles, Environments, Economies and Livelihoods). However, this turtle was not immediately released back into the ocean due to potential transmission of the disease to other sea turtles. It was instead, transported to Canines, Cats & Critters BVI for assessment and later quarantined at the Marine Science Center at the H. Lavity Stoutt Community College (HLSCC) in Paraquita Bay.

Through extensive consultations between veterinarians in the BVI and leading sea turtle vets throughout the region, the recommended course of action was to remove the turtle’s tumours as soon as possible. However, ensuring sustainable, long-term captive care of the turtle was the top priority.
During the first few months, while the team of vets worked on devising a surgical plan, the staff and students at HLSCC worked tirelessly to maintain water quality in the turtle’s tank as ARK volunteers fed the turtle on a daily basis.

While conventional surgical methods would require an extensive recovery time for the turtle, another option was to use a CO2 laser to remove the tumours. This option would be less invasive, would allow for minimal chances of infection and greatly reduce the recovery time. Since this type of equipment for veterinarian purposes did not exist in the BVI, ARK immediately started fundraising to purchase a laser.

In late March, surgical procedures to remove the turtle’s tumours was successfully carried out by Dr. Adam Burch and his team at Canines, Cats and Critters BVI. Over the following weeks, the turtle continued to recover but had to moved to the CTL Home Center in Fish Bay. An influx of sargassum into Paraquita Bay was causing diminished water quality where water was being circulated through the tank and posed a threat to the turtle’s recovery.

By mid-May, “Noah”, as he was named by donors Michael & Barbara Kowalski, had fully recovered from surgery and was ready for release back into the wild.

Since the capture of Noah last year, several more cases of Fibropapilloma have been found in BVI waters. While the origin of this disease is currently unknown, this has prompted ARK to start collaborating with researchers in Grenada and Florida currently studying the disease to better understand its spread both locally and regionally through blood and genetic analysis. This research will be carried out alongside the STEEL Project.
​
The purpose of the STEEL Project is to improve conservation efforts towards foraging and nesting sea turtles and their habitats in the face of climate change and to recommend legislative reform based on scientific data collected in the field and through stakeholder engagement. This project is in partnership with the Marine Conservation Society UK, ARK, the Government of the Virgin Islands and the University of Exeter.

Outbreaks of Fibropapillomatosis have been increasingly recorded around the world since the 1980s, most prominently in the Hawaiian Islands as well as Florida and Puerto Rico. Locally, observations of three turtles with FP at Deadman’s Bay, Peter Island were first documented in 1996, with the last sighting of a turtle with FP in the early 2000s. No other observations of FP occurred in the BVI until small tumours were observed on a turtle that had stranded as a result of a deadly boat strike in 2018 and another turtle photographed in 2019 by a snorkeler in the North Sound appeared to also have tumours. Noah was the first turtle to be assessed and confirmed to have FP in the BVI by a qualified veterinarian with specific training in sea turtle rehabilitation. Since then, several more cases have been found on stranded and local foraging turtles.

The cause of FP is not fully understood but evidence shows a Chelonid Fibropapilloma-associated Herpesvirus is most likely responsible. The disease can range from being minor with only a few small tumours to being severely debilitated with tumours covering the eyes and within the mouth. This will reduce the turtle’s ability to feed, eventually succumbing to death. However, there is documentation of the spontaneous regression of smaller tumours. 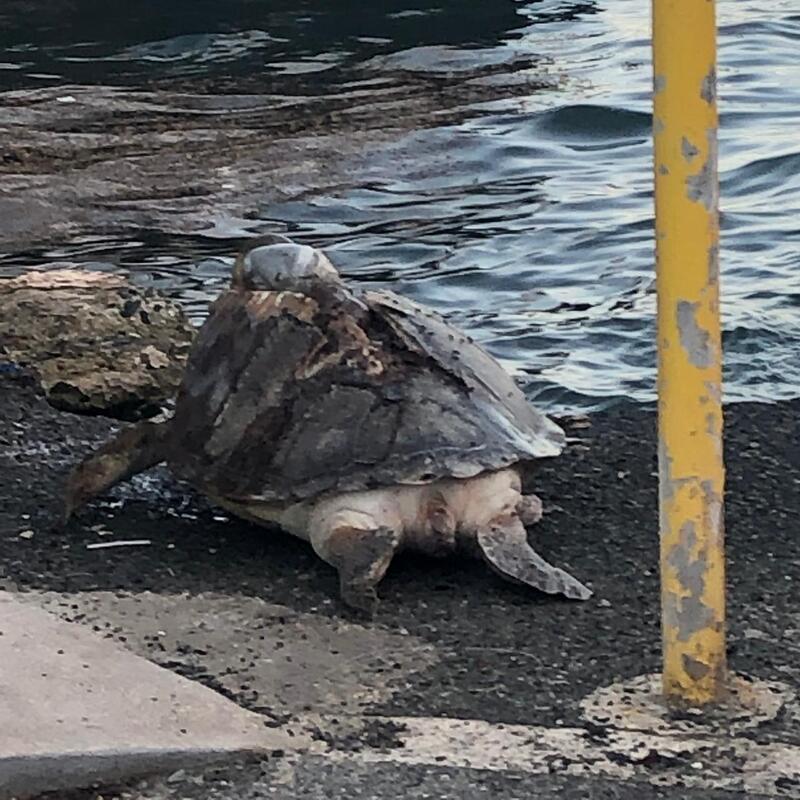 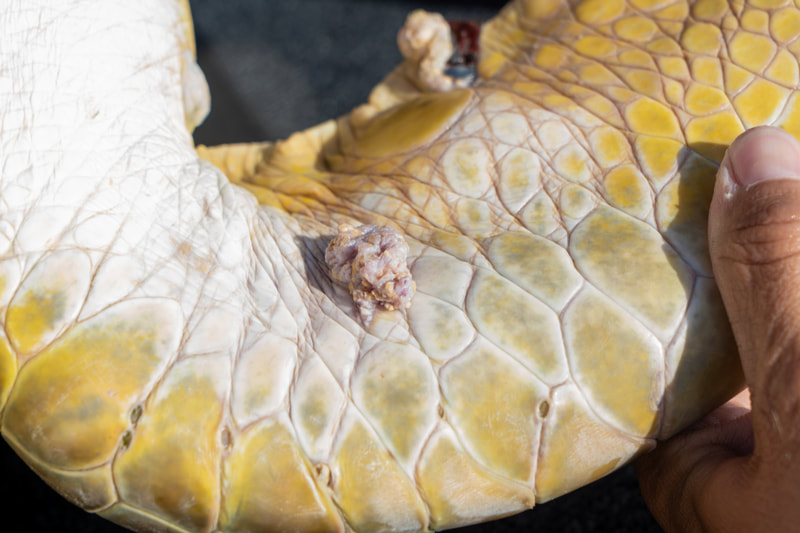 Video shows the turtle with FP prior to being captured.
​Video courtesy of Alton Bertie.
DAY 1: 29 SEPTEMBER 2020 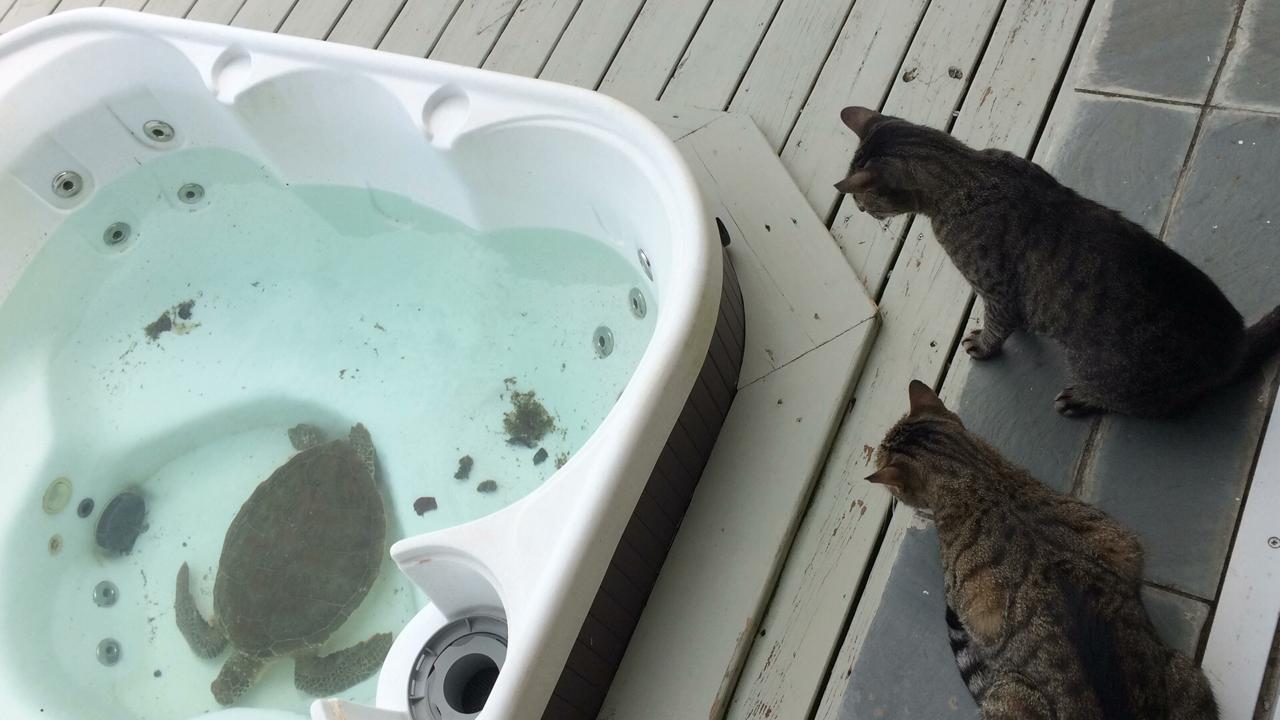 Thanks to David Norris & Saathi Yamraj, "Freddie" had a safe place to stay the first night, complete with security.
Without the tremendous support from the staff and students at the H. Lavity Stoutt Community College, we would never have pulled this off. Everyone there fell in love with the turtle they nicknamed "Pappy". 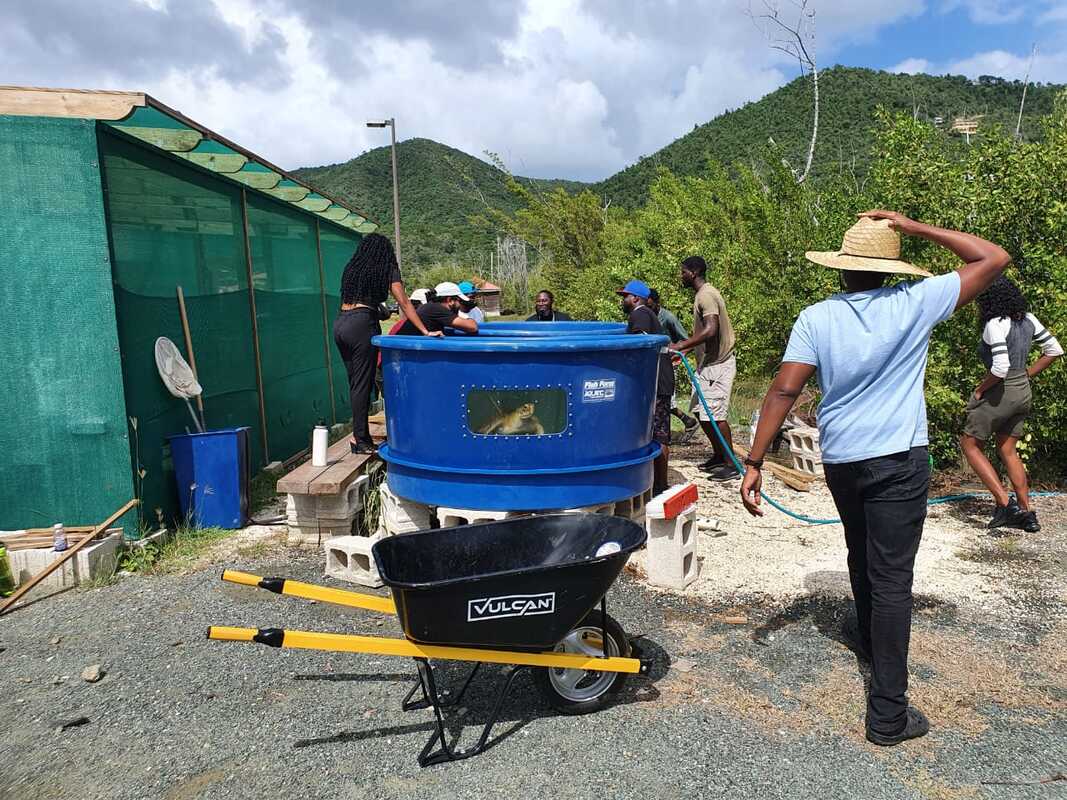 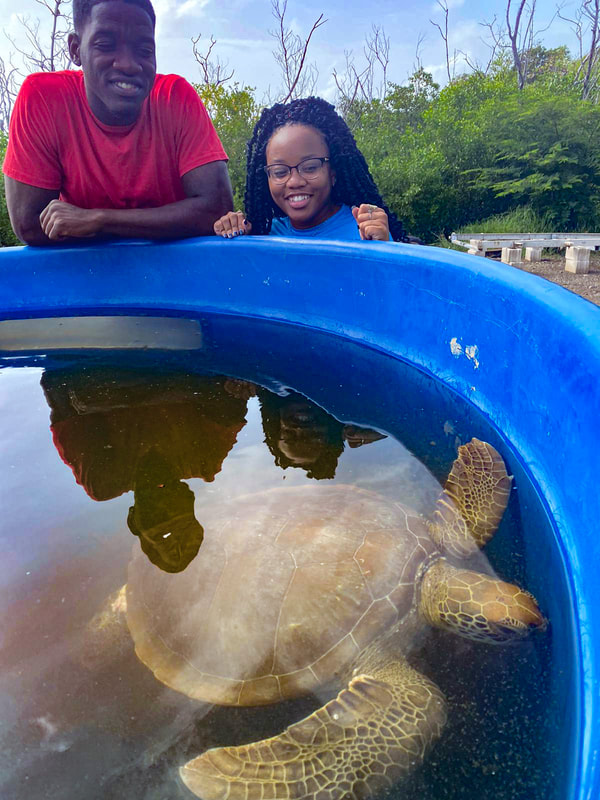 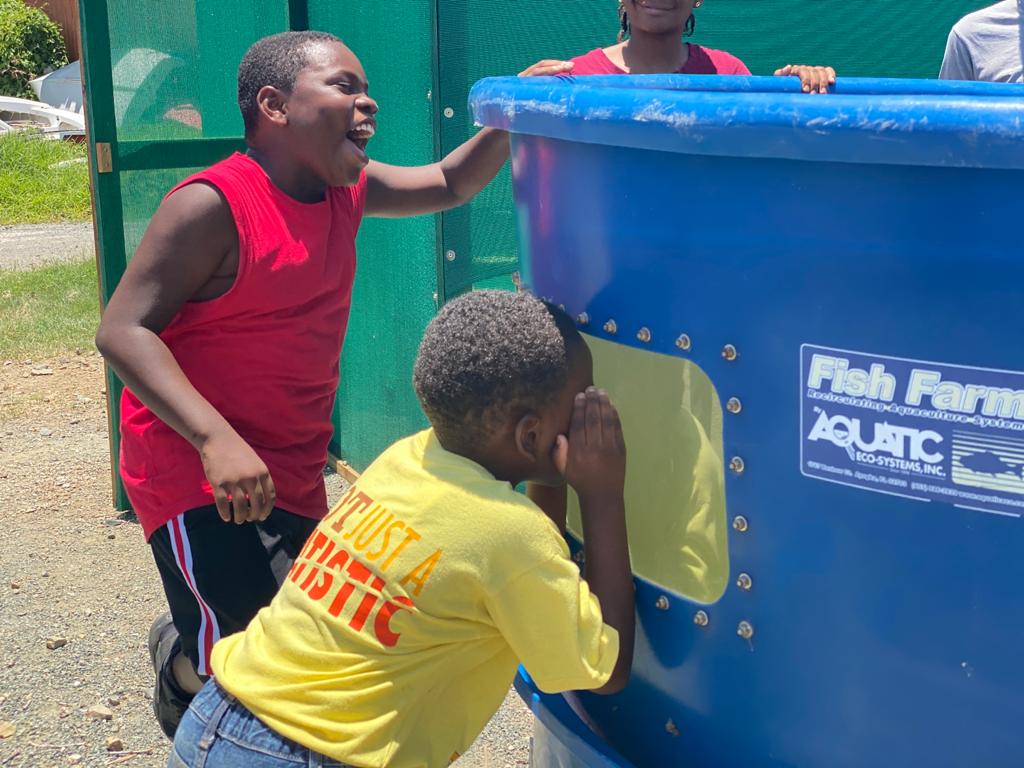 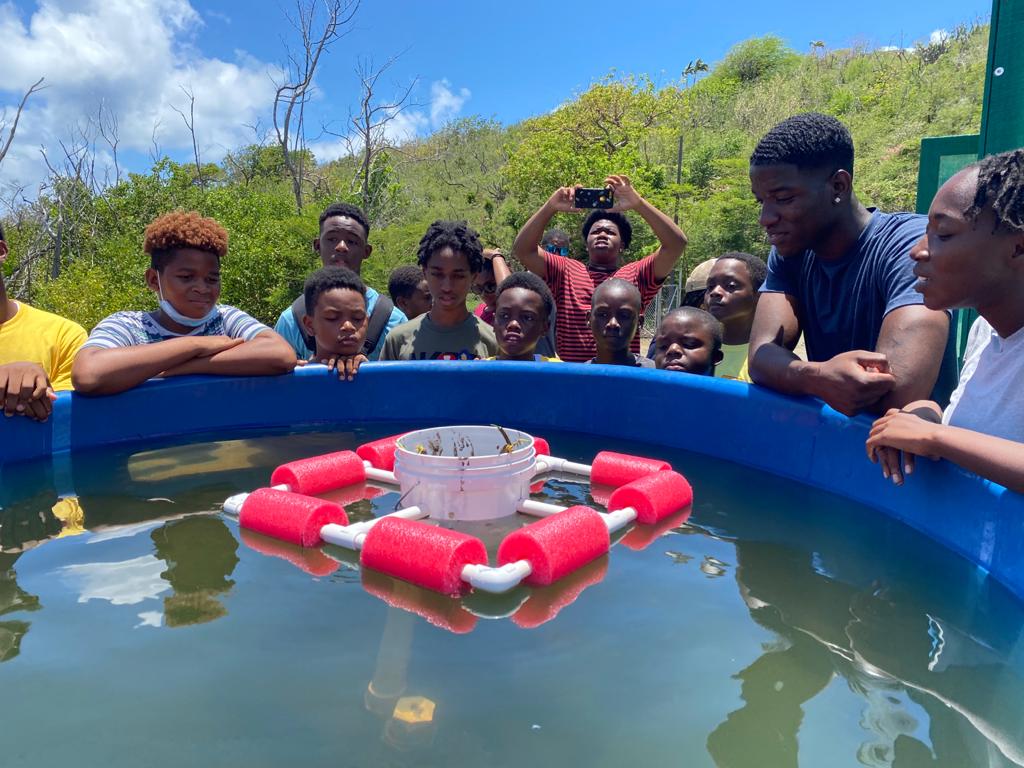 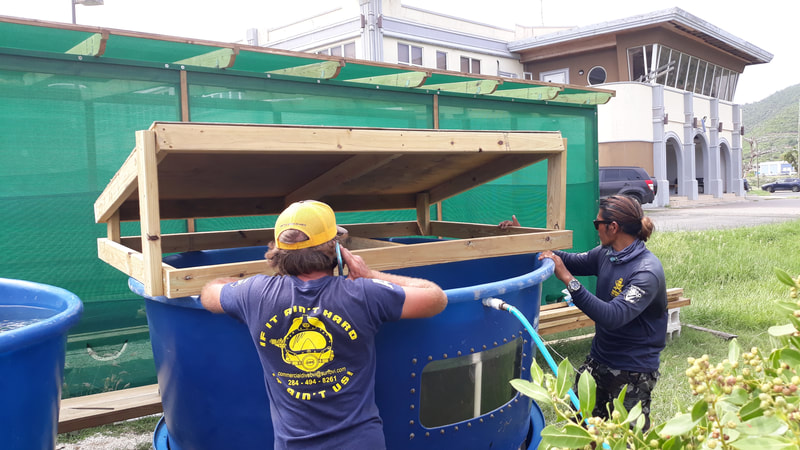 Shaq moving Pappy during a water change in the tank. 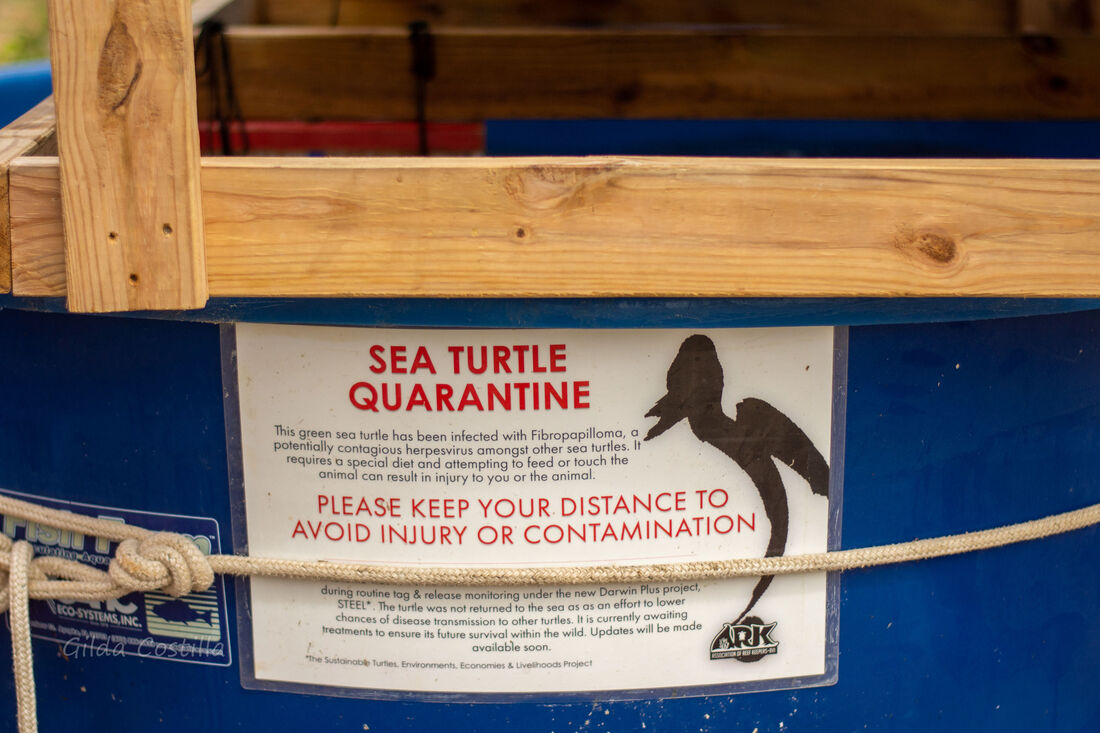 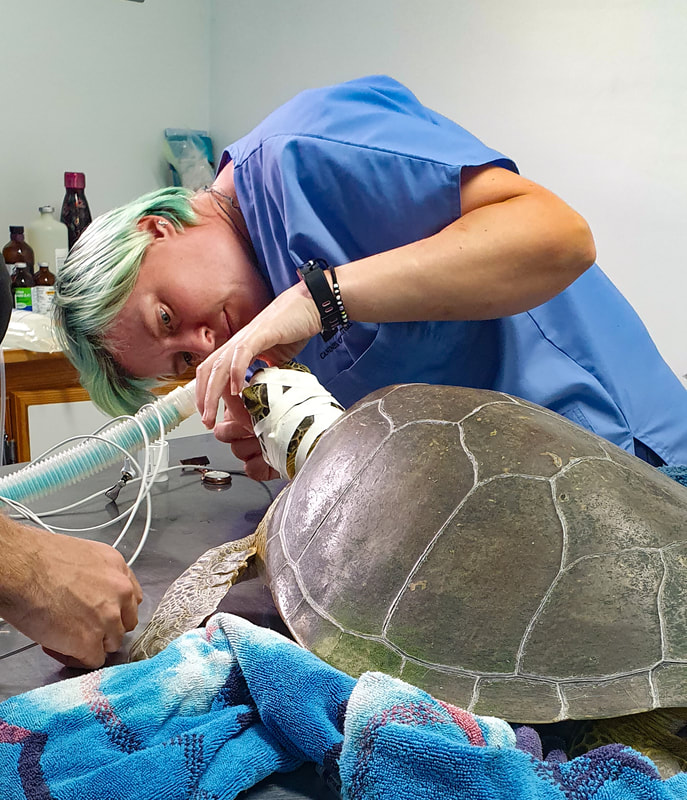 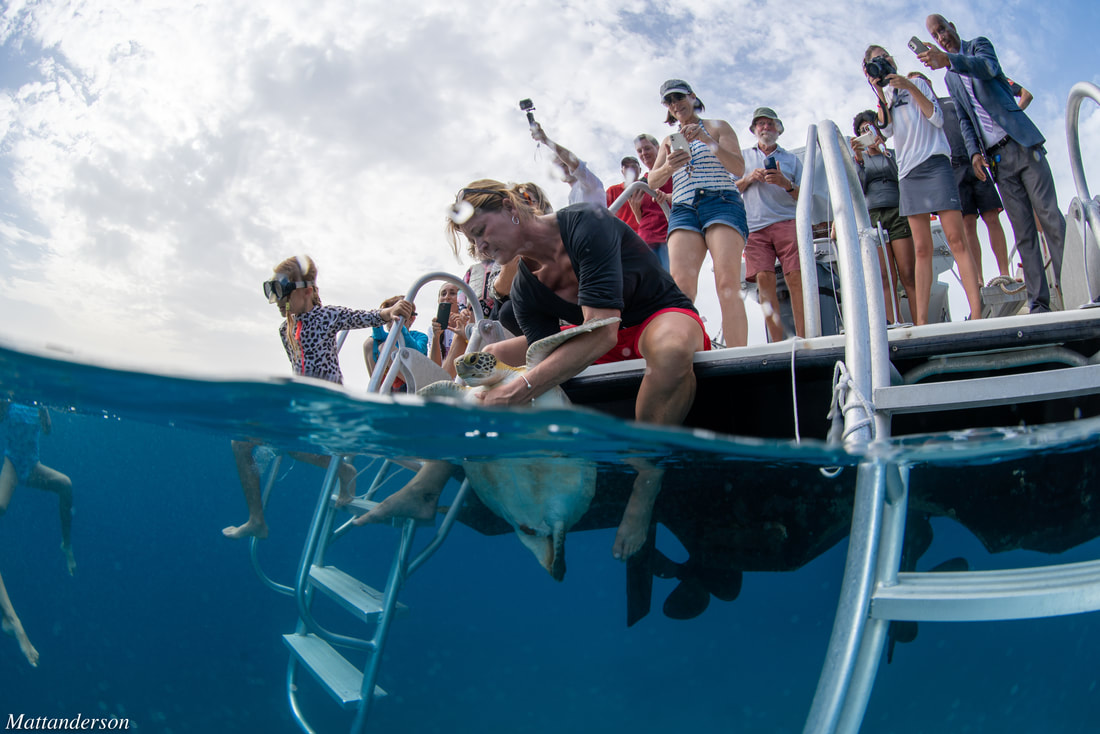